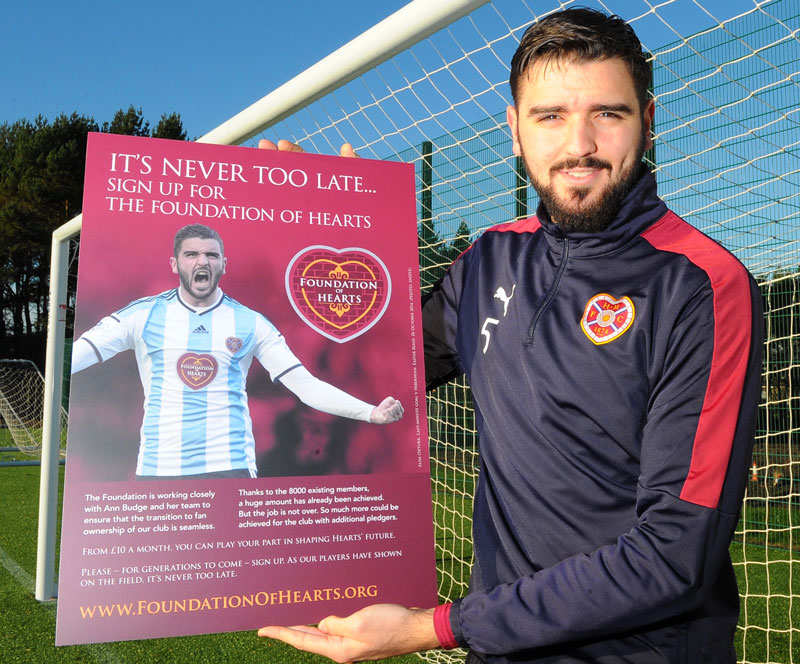 Hearts captain Alim Ozturk does not mind doing things last minute. The defender regards his iconic last-gasp equaliser against Hibs as one of the happiest moments of his career at Tynecastle.

Some 16 months on from that memorable afternoon at Easter Road, the former SC Cambuur and Trabzonspor player has asked the club’s loyal faithful to consider that ‘It’s never too late’ to sign up for the Foundation of Hearts.

From the 8,000 fans making monthly pledges to the FoH, to the supporters selling out Tynecastle every other week; both head coach Robbie Neilson and director of football Craig Levein have said that your incredible backing allowed them to strengthen the team after Abiola Dauda, John Souttar and Don Cowie all arrived on transfer deadline day.

And Ozturk insists he never ceases to be amazed by the level of the supporters’ commitment to the club.

“The backing from the fans is unbelievable,” said the 23-year-old. “It’s been like that since I came to Hearts when they helped the club stay alive, and it’s amazing.

“When I arrived, it was explained to me that every single month the fans put their money into the club. Even for the games, every home match is a full house and last year it was exactly the same in the Championship for home and away games.

“I hope the fans keep giving us that backing and support us because that’s so important. If you want to push the other teams as well, you have to continue to get stronger and they can help us. Their support has laid the foundations for what we’ve done so far but we don’t want to stand still.

“Good players make other players better as well and it’s good for the team to bring in new players, and I hope the new signings do well.”

Ozturk more than appreciates the support from the fans and he was happy to give something back with that stunning 40-yard equaliser in the October 2014 Championship clash. As Hearts prepare to host Hibs in Sunday’s Scottish Cup fifth round clash, Ozturk added: “The Hibs game was special. It was not one of our best games, we were 1-0 down in the derby and Callum Paterson had been sent off.

“In the last minute nobody expected a draw, it was something like the 92nd minute. I thought, ‘I’ll try it’. It’s not something that happens all the time but it happened against Hibs so it was a proud moment.

“It’s one of my best moments at Hearts. To score in the derby to make it 1-1 was so important for us.

“Some of the fans have been bringing that up again this week and they’re expecting the same again. This time I don’t care who scores, if it means winning the game through an own goal, I don’t care. Winning is the most important thing for me, a clean sheet would be good too.”

Ozturk, who has made four appearances since returning from a hernia injury at the tail end of December, added: ” We knew at the start of the season that if we were going to play Hibs then it would be in the cup. It’s happened now so that’s good.

The Foundation are on track to take the club into fan ownership by May 2019 and FoH chairman Brian Cormack insists the supporters can play a huge part in shaping the club’s future both on and off the park.

Brian said: “We are delighted to have the backing of Alim as we continue our campaign to persuade more Hearts supporters to pledge to the Foundation.

“As Robbie Neilson highlighted just a few days ago, the impact of the FoH pledge money flowing through to the club is huge and is making a real difference in his ability to invest in top-class players.

“We are always very conscious of the demands on people’s finances, but if fans can afford to pay £10 a month or more to the Foundation, the results are very, very clear.

“Please – if you can – join up with the 8000 fans who are already pledging and helping the club to move onwards and upwards.    “As Alim and so many of our players have shown on the park, for Hearts it’s never too late.”