FOUNDATION DAY 2019 – A DAY OF CELEBRATION 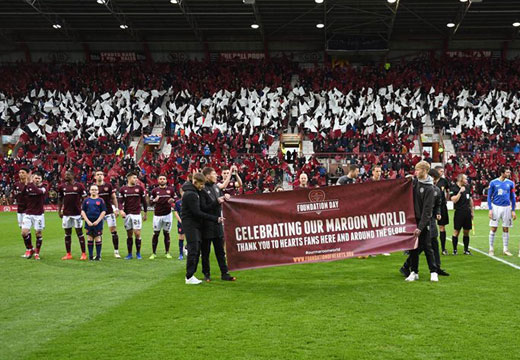 In what is becoming an annual event, the club hosted Foundation Day on 26 January 2019 – the match against St Johnstone.

The purpose of the day was to thank fans for their superb efforts which played such a huge role in saving our club and which remain a vital part of the club’s financial well-being. Here’s part of the script which Scott Wilson delivered on the day and which sums up the key messages: “Together we saved our club for future generations. Together we have written an outstanding chapter in this great club’s story. Together we have rebuilt our maroon world. And together we will keep this amazing initiative moving forward on behalf of Heart of Midlothian Football Club.”

The mood was upbeat and positive, and the stunning flag display in the Wheatfield Stand captured this perfectly. It truly was an emotional scene as the banks of maroon and white flags created movement and colour and delivered a powerful, unforgettable, passionate statement from Hearts supporters united in celebration of their club. It was a scene that will be long remembered.

Before kick-off, singer Neil Grant – who had travelled from Sweden for the occasion – sang his tribute song, There Will Always be Heart of Midlothian, and the players came together to hold a banner which read: ‘Celebrating our Maroon World. Thank you to Hearts fans here and around the globe’. A special matchday programme was produced by the club and this featured an article by Foundation chair, Stuart Wallace, as well as quotes from Foundation members around the world. Stuart and Ann Budge were interviewed on the pitch at half-time and repeated the message of thanks to the Hearts support.

Foundation Day was a great success and we would like to thank everyone who made it possible, particularly the club who hosted it and the staff members there who were so helpful. Also, thank you to the hardy band of volunteers who turned up early in the morning to put flags at every seat in the Wheatfield Stand, to those who manned the pledge stations and spread the word about the Foundation, and to all Hearts fans, without whom, it needs hardly be said, this day would never have happened.