Saturday 27 January will be designated as the first Foundation Day at Tynecastle, with a series of activities to mark the amazing contribution Hearts fans have made to save our club. The contribution from Foundation pledgers to the club now stands at more than £6.5 million, with £2.5 million of that going to the Tynecastle redevelopment work. This is a quite stunning achievement – and it won’t stop there.

One of the most significant events on the day will be the official opening of the Foundation Plaza, the impressive new space behind the main stand. We’ll have a pipe band playing and Hearts legend Donald Ford, one of the original FoH visionaries, will be cutting the ribbon. This ceremony will take place at 1.30pm, and following that – at around 1.45pm on the Plaza – we are inviting fans to come to take part in a group photo of supporters, with scarves held high to celebrate the Plaza opening. We especially encourage those who have purchased their personalised Foundation scarves to bring these along for the photo. 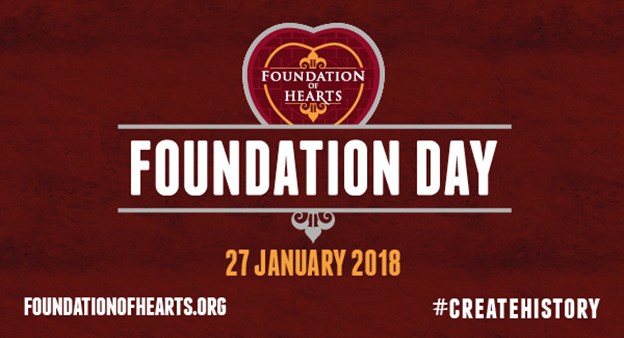 Other activity will see a series of Pledge Stations around the stadium where fans can find out how to pledge for the first time, reactivate old pledges, increase pledges, or make a one-off donation. The players will be warming up in special FoH T-shirts, Foundation Day clappers will be on all the seats, and Bryan Jackson, who played such a key role as administrator when the club was close to extinction, will be a guest of honour and will be interviewed on the pitch at half-time.