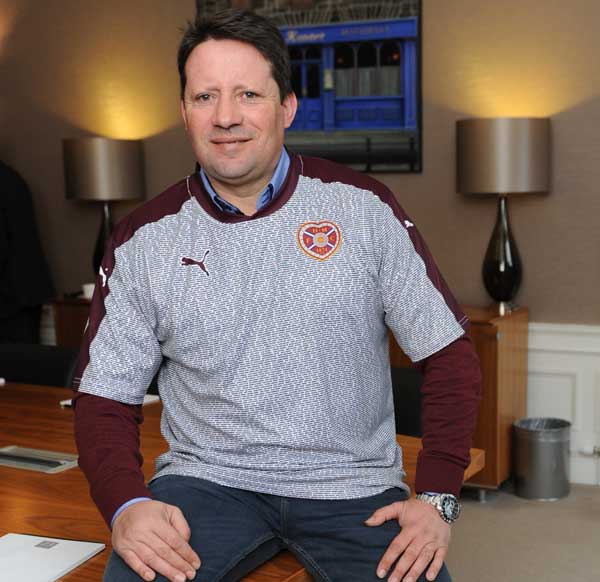 The Foundation of Hearts were delighted to present former manager Paulo Sergio with his own FoH tribute jersey.

The popular Portuguese coach, who masterminded the memorable 5-1 Scottish Cup final victory over Hibs in 2012, is back in Edinburgh to take in Sunday’s fifth round Edinburgh derby at Tynecastle.

Paulo’s name sits among 8,000 of his fellow FoH pledgers on the jersey. The third strip recognises the incredible role played by the fans in saving our beloved club.

Paulo said: “I’m hugely proud to have my name on the Foundation of Hearts tribute jersey. I really feel like I’m part of this great club and this fantastic history, and feel like I’ve also helped in the recovery of the club.

“I have to say many thanks to the Foundation of Hearts. They supported me a lot and they’ve done a fantastic job in helping save the club along with Ann Budge.

“I hope the Foundation will always be around because a big club needs a big foundation around it.

“It’s great to see what has been achieved with the great support of the fans and it’s a big honour for me to be involved in it as well.

“It’s not a big surprise that the fans rallied round but, at the same time, every day we should remember that and be proud of that. Hearts supporters are unique. I don’t see what they did for their club in any other part of the world. The quick return to the Premiership was possible because of everyone.”

Paulo admits he cannot wait to sample the Tynecastle atmosphere once more when Hearts host Hibs on Sunday.

He added: “I’m looking forward to seeing the fans again on Sunday, it will be amazing. Firstly, we want to win this game but it will be a joy to be in their company and be with them. It will be great to be back at Tynecastle.

“I come to Edinburgh with the feeling that I’m home, you can’t imagine it. It’s a fantastic feeling, I’m Portuguese but when I arrive in this city I really feel like I’m home and there are no words to describe that.

“I think it was the respect. Sometimes you don’t win, get titles or targets but it’s always important to get the respect of the people.”