LOUISE STRUTT JOINS THE FOUNDATION OF HEARTS BOARD 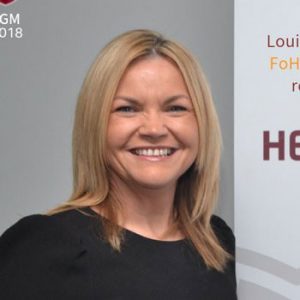 After attending her first Hearts match at the age of four, Louise Strutt still gets exactly the same rush of fevered excitement every time she takes her seat at Tynecastle. So when the chance arrived to take on a more hands-on role in shaping the very future of her beloved club, Louise could not let the opportunity pass.

“I have followed the Foundation quite closely anyway,” said Louise, “I have kept a very close eye on it and to be able to add to what we’ve got is fantastic. It’s a massive challenge ahead. In terms of why I applied for this role, why not? I’ve been a Hearts fan for years and the chance to add your skill, and to be able to input as a fan into the club that you love – plus understanding the business aspect of it – was too big an opportunity to turn down.

“My first game was when I was four. It’s a fantastic club. If you’re a Hearts fan it’s a constant in life; it’s there right through and it does bring a sense of pride because of our history. And I still get shivers up my spine when I walk in on match day!”

Commenting on how she believes that her skills will enhance a board that already boasts a diverse range of expertise, Louise added: “Some fans have mentioned that it’s just another bean counter but in a role like this, you have to understand the intricacies of business.

“At the same time, the industry that I work in is all based on trust, it’s all based on communication and being able to reach out to people so we all have an equal understanding of where we are.

“Regardless of what you pledge, everyone has an equal right to be heard and it’s important that we listen to the ideas that could drive this forward. I’m hoping we can start looking at more cohesion between the fans groups so we can start to get more pledgers over the 8,000.

“We do have 16,000 supporters coming to home games. Yes, they’re buying season tickets but if we can get that bit more out of them that would make a huge difference in terms of what we can do for the club.”